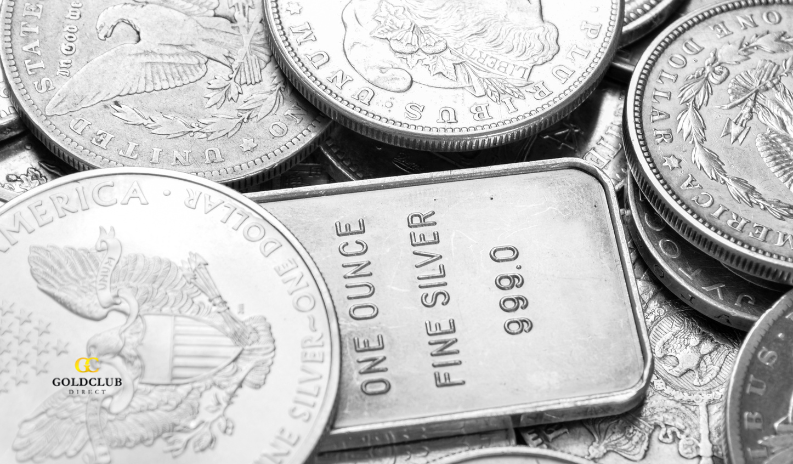 Silver has long been an essential asset as a store of wealth. It can be traced back to the start of silver mining in 3000 B.C., in Turkey and Greece.  After mining the raw silver ore, they were then able to create a process for refining the ore, by heating the ore to a high temperature and blowing air over it.  This process is called cupellation and helped to separate the pure silver from other base metals.

When Europeans first came over to the New World, they found rich deposits of silver running through all of modern South America. These explorers decided to mine all of the silver they could and sell their newly minted products to the entire world.  From 1500 to 1800, around 85% of the silver produced worldwide came from South America.

The Start of Silver Coinage

Silver was not used as currency until 600 BC in the kingdom of Lydia in Asia Minor. Their currency was made of electrum, a naturally occurring alloy of silver and gold. Their idea of coinage quickly spread to neighboring kingdoms and soon came pure silver coins, with the introduction of the silver drachma in Aegina, an island inhabited by Greeks.

As silver currency spread, many different standards for the coinage system came around. The Attic standard, Corinthian standard, and Aiginetic standard used systems that defined the silver coinage based on weight.  Silver coins continued to evolve as time went on, and began to be used internationally to facilitate trade with coins such as the Spanish dollar. Although silver has been used as a monetary standard for thousands of years, it is no longer used. Germany was the last country to stop using the Silver standard in 1873.

With the use of silver for thousands of years, the price has continued to steadily increase. Demand for silver has always been strong, which has kept the price steady.

In the United States, Silver had long been used in the governmental currency. The U.S. had 90 percent silver in all of its circulated coins. However, as seen in the 1960s, this standard was not able to hold up to the demand in the 1960s.

Silver was being used in high demand for industrial output and coinage. The $1.29 per ounce of silver was facing demand stress, and soon the amount of silver in the coins became worth more than the coin itself. The U.S. Mint tried to increase production, but the silver supply could not keep up. President Lyndon B. Johnson decided it was time for Congress to pass legislation to remove silver from U.S. coinage. There was some opposition, but the legislation went through and became known as the Coinage Act of 1965.

This act removed all silver from dimes and quarters and decreased the amount of silver in half dollars from 90% to 40%. The Coinage Act of 1965 also shut down all production of silver dollars until 1970. Silver half-dollar production was also banned in 1970.

In the years after the act was passed, the silver coins were still being circulated, however, collectors started gathering up pre-1965 coins for their silver value. In 1967, the United States Department of Treasury stopped its intention of keeping the price of silver low.  These events started the quick increase of the price of silver for the next 15 years.

The price of silver jumped so high so quickly mostly due to the efforts of the Hunt brothers from the well-known oil tycoon family. They believed the value of the dollar would plummet, which would lead to a dramatic increase in the price of silver. They began buying a large amount of physical silver as well as futures contracts, where they took delivery on the silver instead of cash settlements.

This triggered the rise to almost $50, as the Hunt brothers continued to borrow money to buy more futures. As the short squeeze developed, the U.S. government decided to step in and prevent any more long position contracts from being written or sold. This led to the start of the price of silver falling.

With the price continuing to fall, there was doubt the Hunt brothers could meet margins with new loans. This all led to March 27, 1980, when the Hunt brothers missed a margin call and the price of silver dropped to below $11. This day became known as “Silver Thursday.”

The price of silver stayed around $5 up until 2004, when we started to see another rise. The price of silver steadily rose, except in 2008 during the financial crisis, up until 2011. In 2011, silver reached a high of $48.70. Due to economic instability silver prices have been very volatile in the past 20 years. Very soon after its high in 2011, silver shot right back down to under $20 an ounce. This was mainly due to the economy recovering and less need to hedge against a crisis in the economy.

The price continued to fluctuate with the risks of the pandemic, stimulus talks, inflation, unemployment, etc. Silver has hovered around $25 for the past year. This year, however, Silver has dipped below the important $20 mark. It has now reached a two-year low, down more than 5.8%. Silver has had a more severe drop than other precious metals like gold. This is because of rising interest rates as well as silver’s use in industrial production of energy alternatives, which has slowed in other countries.

Silver is seen as both an industrial metal and a precious metal, so it can see the downsides of both.  However, with this, one can also see the upsides of both. Although silver is dropping in the near term, there is a bright future in the long term due to its intrinsic strength in holding value over time, as well as its importance in the renewable energy industry.