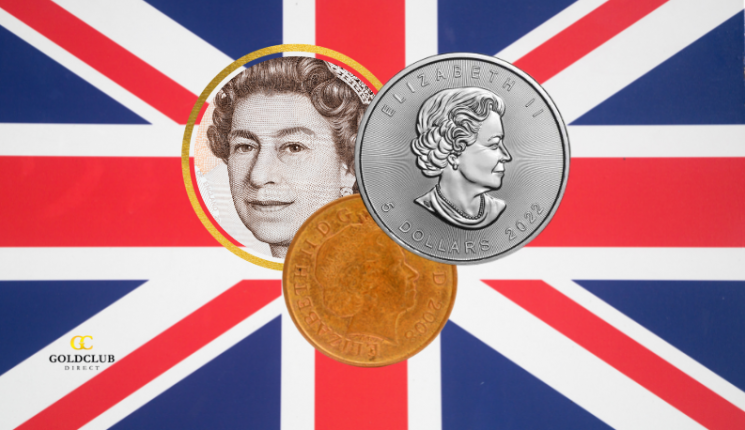 Queen Elizabeth reigned as Queen of England from 1952 until her death on September 8th, 2022. She ruled for a total of 70 years and 214 days, becoming the longest reigning British monarch and second longest reigning monarch behind King Louis XIV of France. For the past 70 years, the Queen’s effigy has been used on coins and banknotes in the United Kingdom as well as on currency from Canada, Australia, New Zealand, and other countries part of the Commonwealth. The Queen was also featured in the national anthem, and on stamps and passports in the U.K. With her death, Queen Elizabeth II will be replaced by King Charles III.

Since it has been 70 years since there has been a change in the monarchy, many people have not experienced what this means for coinage. Although the Royal Mint has not explicitly said when coins featuring King Charles III will start being issued, the process of changing effigies has begun.

Queen Elizabeth II has had 5 major effigies featured on currencies around the world. Her first portrait featured on coins appeared in 1953, the first year of her monarchy. The design by Mary Gillick, who won the Royal Mint Advisory Committee’s (RMAC) competition, featured the young Queen wearing a classical laurel wreath.

The second portrait was designed by Arnold Machin RA in 1968. Many believed this new portrait would help to distinguish new coins from old ones. The Queen sat for Machin four times before the final design was picked.

For the third portrait, the RMAC invited Raphael Maklouf to submit possible designs for coinage. Maklouf created clay portraits during live sittings with the Queen. The final design, released in 1985, was meant to be portrayed as a symbol of the monarch, rather than just a photograph.

In 1996, Ian Rank-Broadley FRBS was invited to participate in a competition for a new portrait. He gained a reputation for being one of Britain’s leading low-relief sculptors. After many tinkering’s with the portrait, his design was entered into circulation in 1998.

The fifth and final effigy of Queen Elizabeth II was designed in 2015 by Jody Clark, the first time in over 100 years the portrait was designed by a designer from The Royal Mint. The portrait displays the monarch wearing the Royal Diamond Diadem crown. This effigy is currently used on current British coinage.

Sovereign mints that also feature Queen Elizabeth II on their coins have their own designs. For example, the Candian Maple Leaf presents a design of Her Majesty in right-profile relief without a crown, created by Susanna Blunt in 2003. Australian coins, such as the Kangaroo, also feature a design by Jody Clark, originally meant for British coinage.

Since many believe this to be the last year Queen Elizabeth II will be featured on coinage, the demand has skyrocketed with many websites selling out of their bullion products featuring the Queen quickly after the news came out. This, along with an already low supply, led to a supply squeeze that saw the prices of precious metals shoot up on Monday, September 13th.

With the passing of Queen Elizabeth II, The Royal Mint, The Perth Mint in Australia, and The Royal Canadian Mint will begin phasing out coinage with an effigy of the Queen. These designs will be replaced with portraits of the new King, King Charles III. The design to be featured on British coins will most likely be picked in a similar competition-style fashion to Queen Elizabeth’s effigies.

Using history as a guide, the process of switching all currencies to feature King Charles III will be gradual. Before British coinage was updated for decimalization in 1971, it was very common to see different monarchs on coins even though Queen Elizabeth II had already been Queen for almost 20 years. Queen Elizabeth II coinage will continue to be in circulation for years to come.

Since the last change in the monarchy was over 70 years ago, many aspects of the governments’ and mints’ systems could be different. Coinage featuring the King should start to be released into circulation within the following year. One characteristic that we should see is King Charles III being seen in left-profile relief. It has been a tradition to alternate the direction in which the monarch faces after each change in monarch. Since the Queen was depicted in right-profile relief, King Charles III would face the opposite direction.

The Royal Canadian Mint has said, “A change in Monarch does not require the replacement of circulation coins. Therefore, Canadian consumers and businesses can continue using all coins currently in circulation… The Mint will also support the Government of Canada as it works to determine a new obverse (heads) design for future Canadian coins.”

Although the Royal Mint has not released a similar statement as of yet, it is expected to be similar to the Royal Canadian Mint’s statement. At this time, it is hard to infer whether there will be any delays in the production process as the mints begin switching to effigies of King Charles III. During the transition, all older currencies should remain legal tender.

If you would like to acquire the coins from the last production cycle featuring Queen Elizabeth the Second, check out GoldClub Direct. GoldClub Direct offers the best prices on British, Canadian, and Australian coins.